Happy Pancake Day! I’m not exaggerating when I say it’s one of my favourite days of the year. It’s the simple things isn’t it. It isn’t over the top like christmas can sometimes be, emotions aren’t usually running high and the expectations are low. I mean, for me the expectations are just to eat pancakes (at least once). Pancakes of any kind are up there with my favourite things to eat, I think it’s all the accompaniments that go with them that makes them fun and of course the process of making them and flipping them! Who’s the best flipper?! Building them up how you like them, mixing it up, lemon and sugar, fruit and chocolate, maple syrup… Even savoury pancakes are wonderful. This recipe can be used to make savoury pancakes too, just omit the vanilla essence in the batter and perhaps add a small pinch of salt. I’ll definitely be making some savoury crepes later – watch this space for another recipe.

I think for me there is a small emotional attachment to pancake day too. I have so many memories of making pancakes with all the family in the kitchen, flipping contests, getting one stuck on the ceiling, who can eat the most – real simple childhood highlights. Each year it reminds me of the importance of getting kids involved in cooking and teaching them recipes and making memories. Also there is something quite humbling about pancakes – they are so cheap to make and they inspire creativity in all of us! 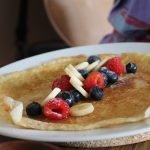 A super easy recipe for vegan crepes that can be adapted to sweet or savoury. If you'd like to make them savoury, simply omit the vanilla essence and perhaps add a small pinch of salt to the batter.