When I was young, my mum used to make these rock cakes and we lapped them up, just like all of her delicious bakes. I had forgotten about them until they recently popped into my head and I decided to create a vegan version. They are super simple to make, but very well received – there is something quite humble and comforting about them. They go beautifully with a cup of tea mid afternoon or for a tasty snack post dinner.

I have created this recipe with Christmas fast approaching, so those classic christmas flavours were my inspiration, with a rather festive orange and mixed spice flavour they have a very satisfying crunch on the outside but are soft and fluffy in the middle.

They are perfect to make with kids too, as they are really easy and don’t require any finesse. You can switch out some of the dried fruit with a sprinkling of crushed nuts or even some chocolate chips instead! 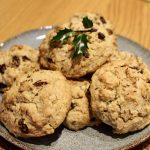 Easy to make, delicious rock cakes that go wonderfully with a cup of tea. These cakes have a satisfying crunch on the outside but are fluffy in the middle, with a rather festive orange and mixed spiced flavour.