During the recent lockdown, I spent a lot more time in the kitchen, which I welcomed whole heartedly. I had more time to experiment and create new recipes and work on ideas. One of which were these stuffed mushrooms in pastry baskets! Danny and I were having a conversation about vegan options for the main component of a sunday roast and how we need to come up with something new. We love anything pastry based and obviously adore a stuffed mushroom, so Danny said “cover the mushroom in pastry!” So I will give him the credit for the idea… but then I made it happen… and he was delighted! (What a team!). Since coming up with the recipe we’ve had them a bunch of times and we can’t get enough.

The mixture for the filling is a bit like a rich and creamy red pesto with a little kick (which you can alter to your taste of course) and with the lemony breadcrumbs on top, it makes for a delightful alternative roast dinner. So maybe not your typical sunday roast flavours, but life is about mixing things up isn’t it? We usually serve this up with a side of simple roasted veg and potatoes, but you can go for more of an all out roast if you’d prefer! Of course it doesn’t have to be a roast – for instance, it would go very nicely with mash potato, chips and mushy peas or a couscous salad. 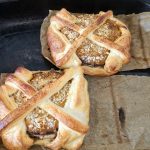 A flavour packed stuffed mushroom in a pastry basket.